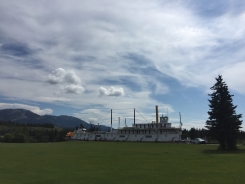 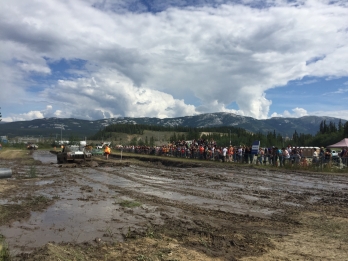 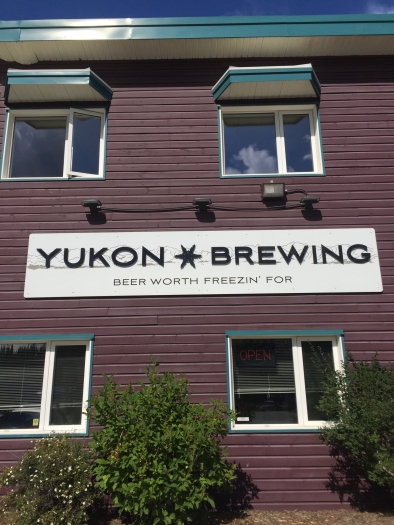 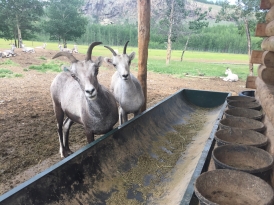 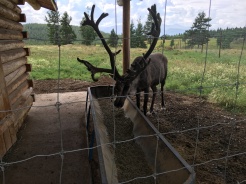 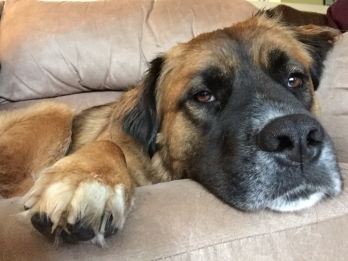 We had been looking forward to visiting the Yukon for much of the trip, and Whitehorse was our home-base for almost two weeks while we explored. The entire territory is only 37,000 people (27,000 of whom live in the immediate Whitehorse area) but luckily a few of them were old friends who showed us some of the awesome things the territory has to offer.

The Light: Visiting in mid-July we got to experience some pretty long days. The sun didn’t set until 11pm and it wasn’t dark until well after midnight. While we knew it was gonna be weird, but the fact that the evening light still starts at around the same time triggered a certainty that the sun would soon set … that was never the case.

Local craft beer: We enjoyed a lot of Yukon beer while visiting, mostly from the Yukon Brewing Company. As part of our orientation, we were told that the Yukon might be the only province/territory in Canada where a majority of the beer purchased is craft beer. It’s easy to believe. The Yukon Brewing Company is an institution. We enjoyed some tastings at both breweries and had no shortage of beer to drink while we visited.

Making lasagna: Okay, so not a Yukon-specific experience, but it was here that we made lasagna for the first time ever. It was awesome fun. While it’s not a road-trip friendly dish, we’ll be making a lot more when we get back to having access to an oven.

Yukon Wildlife Preserve: This is the home to a variety of rescued creatures from across the territory. Given some fairly large spaces to roam, we were able to spend some time watching (sometimes through binoculars) some elk with giant antlers, a couple of caribou who wandered into view, deer, bison, thin-horned sheep, mountain goats, muskox, a lazy lynx, some very active arctic foxes, and some cute, but not as cute as they are in winter, snowshoe hares. We were also constantly being spied upon and circled around by the local arctic ground squirrels who chased each other around and popped up onto their hind legs to chirp at us. While we couldn’t find the moose in their large domain, we were treated to up-close encounters with a bald eagle and peregrine falcon, both of whom were (hopefully) temporary residents at the Preserve.

Bean North Coffee Roasting Company: Located beside the reserve, this tranquil coffee shop in the middle of the country made some great coffee and snacks. It was really lovely to be able to sit on the big patio and enjoy one of the few days of nice whether we had in the north (it was unseasonably rainy while we were there).

The Whitehorse community: The community of Whitehorse is really quite lovely. It has a unique small-town quality in that it is a small-town, but it isn’t really defined by any larger nearby cities (because there are none). We met lots of really friendly locals.

Bonus: S.S. Klondike (an old steamwheeler that used to move supplies down and gold up the Yukon River), Well-Read Books (the great used bookstore in town), more disc golfing (this time with beer and a dog), the Mud Bog (souped up trucks racing through mud troughts), Midnight sun coffee (another great coffee place in town).

Dodgy (the minivan we’ve been driving around the continent in) had some brake trouble while we were in town. We thought we might be stuck in Whitehorse for the week, despite our desire to go exploring. Luckily, our friend Élaine was awesome and lent us her car so we could drive to Carcross and Atlin.

The Carcross Desert: Just south of Whitehorse is Carcross. After driving between mountains and around lakes, as we descended into Carcross we suddenly found ourselves surrounded by large sand dunes. Called the smallest desert in the world, the climate is actually too humid to qualify as a desert. The dunes here were formed by silt left be receding glaciers. The town is also pretty cute, with some touristy shops and a lot of history.

Atlin: Atlin is a very small town on the largest natural lake in British Columbia, but you can only get there by first driving to the Yukon and then (almost) to Whitehorse. The views along the drive, and from town, are stunning. Across the lake, glacier peaked mountains are easily visible and there are beautiful views in every direction. We camped at a free site south of town near some hot springs, but due to lots of rain we couldn’t get great photos and also didn’t take advantage of the springs (silly). We almost got stuck there. On our way back into town on a dirt road, we came around a corner and found a tree had blow over in the night and blocked the road. We spent about two seconds seeing if we could drag it out of the way, but it was a big tree and it wasn’t going anywhere. So we very carefully drove over/around it. 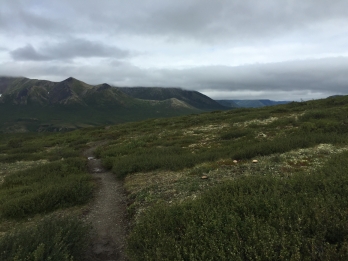 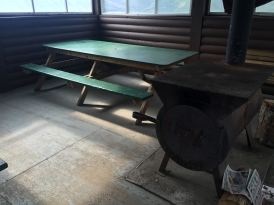 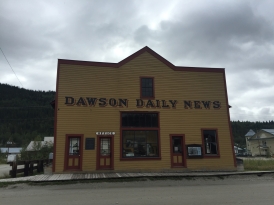 The Dempster Highway: Once Dodgy was ready to roll again, we headed north, yes, further north. The highway to Dawson is a pretty standard highway. As with many roads in the north, there are stretches of gravel here and there but the views are beautiful. But our first stop wasn’t Dawson, it was Tombstone Territorial Park. To get there, you have to take the Dempster Highway which starts just east of Dawson. It’s called a highway, and the speed limit is 90 km/h, but don’t fool yourself, it’s a dirt road with lots of pot-holes. With all the rain, it was a very muddy drive. Tombstone is about an hour’s drive north on the highway, and when we got there, it was like the entire back half of the van had been painted brown. More adventurous travellers were taking the highway up to Inuvik (Northwest Territory) and to the Arctic Circle, but there’s no way we were gonna try that trip without a high-clearance, oversized tired, all-wheel truck. Just, no.

Tombstone Territorial Park: Tombstone is where we got a taste of the arctic tundra and Biringia. The tundra is the ecosystem where the soil is so thin and perpetually frozen so only small plants can survive. Biringia is an area that encompasses parts of the Yukon, Alaska, and Siberia where there were no glaciers during the last ice-age. It’s the land-mass that formed the land-bridge that humans used to cross into the Americas thousands and thousands of years ago. Combine the two and it’s a pretty unique ecosystem. While is was cloudy and rainy most of the time we were there, we took some awesome hikes, ate some berries (we were told all the berries in the park are edible), spotted a grand variety of mushrooms, and Amalia  picked some delicious Labrador Tea from the tundra. We also really enjoyed the campground lodge at Tombstone. Common to many Yukon Territorial campgrounds, but in full effect at Tombstone, the lodge is an enclosed space with four picnic tables and a big roaring wood-burning stove in the middle. There’s something special about returning from a long damp hike to relax around the stove with other travellers. There were also about a hundred wolf spiders in jars stacked in the corner (scientific research), but Ben did his best to ignore them.

Dawson City: A gold rush city, Dawson is located north of Whitehorse, but down-river from Whitehorse. So one drives *down* to Dawson. With so much history, the city itself is a National Historic complex, with many gold-rush era buildings and museums. Due to its status, even new buildings have to be designed to look as if they were built in the 1890’s. Needless to say, the town is picturesque and has a lot of character. With so much to see, we decided to take a town tour that contrasts what it’s like to live in the town in the present day with what it would have been like to live in the town during it’s golden era. Because of our schedule, we couldn’t spend too long in Dawson, but there is a lot more we would have loved to do and see. Several days in town are definitely recommended and we hope to come back here someday. 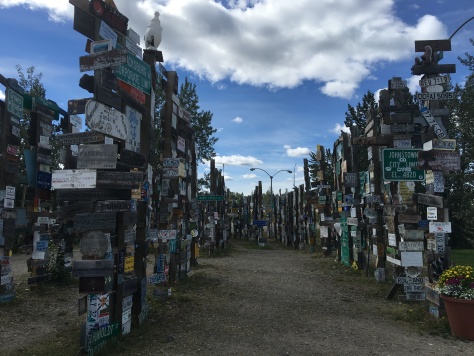 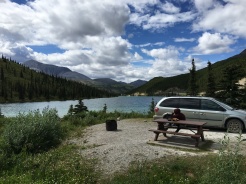 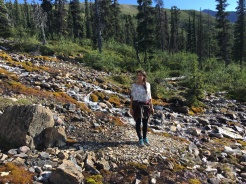 Wildlife along the Alaska Highway: The drive south from Whitehorse to Alberta was another beautiful trip. And, even though it is a much busier road than the Casiar-Stewart highway, we saw a lot more wildlife along the way. Highlights included bison (hanging out either alone or in large groups), black bears munching away on the greenery, curious woodland caribou, distant mountain goats, foxes, gray jays, and giant dragonflies.

Liard Hot Springs Provincial Park: We had a shortlist of things to stop and do on our way down, and the Liard Hot Springs had been mentioned by multiple people. Nestled in a lush green canyonesque valley, a fifteen-minute walk along a boardwalk through the marsh and forest brings you to the springs. Developed for human bathing, the springs empty into a two-tiered pool to allow for different temperatures. The top pool near the spring was super-hot (almost 40 degrees celsius), but the lower pool was just the right temperature to unwind from so much driving. Surrounded by the trees, it was a beautiful setting to relax – Ben didn’t really want to leave. Walking further up the hillside, there is a slope teaming with interesting ledges and plant-life as another spring outlet trickles out of more cracks and creates a hanging garden. The only off-putting aspect of the stop were the pit-toilets. At no point on our trip had we come across so many toilet-dwelling flies. Like something out of a movie, when opening the toilet lid, a thick, spiralling swarm of flies came rocketing out of the blackness below. Ew. To the bushes Amalia went.

Mountain Lakes: There were so many beautiful mountains, rivers, and lakes along the drive. It is a special feeling to come around the shoulder of a mountain, and see a valley before you, filled with glistening, bright blue water. Muncho and Summit lakes were especially stunning. We camped at Summit lake where a lovely trail loops up into the mountains, passing through forest, meadow, and tundra.

Baked goods: There isn’t a lot between the communities of Watson Lake and Fort Nelson, but there are a few treats to be had along the way. We had some amazing home-made bread and a succulent cinnamon bun in Toad River.